As the second year of the BORN2BE program begins, we are reflecting on what can only be described as an extremely successful year.

BORN2BE Records was founded in 2020, with the goal of harnessing young potential within the music of black origin. As a label, it provides young talent with a practical environment for learning – offering crucial assistance towards their evolution into the music industry.

When asked whether he feels BORN2BE achieved this goal in Year 1, Label Executive Darren answered: “Overwhelmingly, yes. Just look at the cohort, Cherelle (Label Executive) and I want to give credit to the artists (Shaks & Kwazi) – they have reached a level that is quite impressive in the industry. Looking at them now, compared to when they first started, they are not the same artists. The funding, support, and network they were given have helped them excel in their talent.”

Throughout the previous year, the BORN2BE team received support from executives and various outside sources, like ACE member Andre and guest talks in monthly company meetings. Speaking on this, Darren added: “Success can be seen around the whole team. One of our A&Rs has been promoted within BORN2BE and is working alongside other organizations within the industry. Our other A&R has started their career at the BBC, as well as beginning to launch their own enterprise. Our Agent is setting business plans and getting involved with the events industry. The Social Media and Communications Assistant is starting their own enterprise whilst freelancing at the BBC. It’s very, very positive.”

Undoubtedly, BORN2BE’s first-year cohort proved themselves to be an immensely strong team. The team was supported by the incredible youth executives Trevon and Devonta, who unfortunately had to leave the program in earlier months. Label executives, Darren and Cherelle, led the team throughout the course of Year 1, continuing to do so for Year 2 – and for years to come.

Shaks and Kwazi, two Bristol-based artists signed to the label in 2021, were supported by A&R’s Marcus and Jamal as well as agent Xavier. All members of the label, and the label itself, were represented on socials by Social Media and Communication Assistant, Max.

Jamal, who took on the A&R role for artist Kwazi, commented: “We started off a bit rocky, as with every new team when you don’t know each other at first – you can be apprehensive. As the months went on, we all just got on so well. If we hadn’t, we would not have seen the success we did. BORN2BE brought together a strong team 1000%.”

Also speaking on the development of the label as the year went on, Cherelle, Label Executive added: “Once the ball was rolling, I really got a sense of teamwork, I hope these guys will take these connections they have made and continue to blossom them.”

Considering the extent to how much has been achieved within the first year of BORN2BE, we asked the staff and executives what their personal highlights were.

A&R Marcus said: “I really enjoyed being on set for one of Shaks’ music videos. Another highlight was being involved in the studio sessions and seeing what goes on behind recording a song. Of course, the listening party was a real highlight for me this year. The listening party was a private industry event that BORN2BE hosted in August 2021. Several esteemed members of the Bristol music scene and BORN2BE investors gathered at Hamilton House to enjoy food, networking, and performances from both Shaks and Kwazi –this was Shaks’ first ever public performance.

Also discussing his personal highlights Max mentioned that: “The listening party had great energy. Both Shaks and Kwazi were great on stage. It was hard to believe this was Shaks’ first performance.” Shaks himself stated, in the currently unreleased BORN2BE documentary, “performing at The Exchange was a real highlight for me.”

When asked about her Top Three moments, Executive Cherelle commented: “Three best moments are tough to pick! Definitely the listening party – we were able to showcase the artists and put them in a room with like-minded people. A second highlight would be both artists releasing their music, they have hit numbers that are amazing. Lastly, being sat around the table with the team recently and hearing how they have developed in terms of their business plans, I can see they have taken on the lessons and guest talks, they understand better the process of releasing, and what it takes to be viable in the scene.”

Label Executive Darren added: “Of course, the listening party, it was a great celebration. Another highlight would be the artists getting paid for their streams. There have been so many great moments but seeing the artists getting a cheque for their work was really nice. The third highlight has to be, through grafting from the team and Jamal, being able to land a showcase on the main stage of Love Saves The Day 2022!”

Year 1 has been full of highlights for all the members of the team. Many of these moments welcomed outside parties from Bristol’s music scene, offering the team and artists incredible opportunities to learn, collaborate, and network. Notable outside sources that featured were names such as Javeon, Blazey, Laura Lewis-Paul, CMHD, KennySounds, Kevin Philemon, and AC Pro.

As mentioned briefly above, guest talks played a big role in the dynamics of BORN2BE, Year 1. Every month, alongside personal one-to-ones, the company held a meeting with the entire cohort. In several of these company meetings, guests from the industry came in to offer advice on their area of expertise. Featured within these guest talks saw the likes of Blazy, Javeon, Kevin Phillimon, Relly, Amy (Team Love), Yushh, and Darren.

Knowing the importance of these talks, we asked several team members who their favourite guest talks were. Agent Xavier answered: “Kevin was really entertaining, that one stuck with me. He spoke about his life story and that featured lots of life lessons.”

Talking about who stuck out most to him, Jamal said: “Yushh, she was discussing how publishing, royalties, and radio plays are so important to an artist and their branding. She explained what publishing is, which was really helpful as I did not fully understand it before.’

Cherelle and Darren both struggled to pick a favourite guest talk, due to the quality of all of those that had happened over the course of the year. Cherelle decided: “I have to pick a top three. Blazys one was hard-hitting and gave a good reality of what it takes to be an artist. I really liked Kevins – he was very different; it was very interactive. He spoke about his life in a very relevant way to what the team needed. I also got a lot from Javeon, to hear about the process of songwriting was very helpful for me to hear.

Agreeing with Cherelle, Darren stated: “I might have to go with Blazy, the timing of his talk was very important at the start of the program. It was a good moment for the cohort to learn about making money, getting bookings, and managing their careers.”

Year 1 has now drawn to a close…However, it only leaves anticipation of what to expect from BORN2BE in year 2. It’s clear the company is progressing, and over the next few years will become a strong pillar in the Bristol Music scene. The first year had many learning curves, challenges, ups, and downs but overall left a great impact on the team and set up BORN2BE for a very strong second year.

Stay close to BORN2BE’s socials to find out who will join the cohort – as artists, A&R’s, Agents, and Social Media Assistants. Some members of the year 1 team will continue their time with BORN2BE into year 2. Kwazi and Shaks will both remain signed to the label, only now joined by two new artists. A&R Jamal has been promoted to Operations Manager to help implement many of the board’s ideas to the team. Agent Xavier is also staying on to continue to support Shaks and Kwazi in their careers. However, BORN2BE does say goodbye to A&R Marcus and Social Media Assistant Max – although, they will remain involved in capacity through their own projects!

So, what does the long-term future look like for BORN2BE? Label Executive Darren has said: “In 5 years l see BORN2BE continuing our work – which is a hard thing to achieve, but I feel we are doing something that isn’t being done elsewhere. I think we will have a successful impact on the Bristol scene. We will create more leaders who will help shape the scene. In 5 years, I see us making a large social impact.

Also taking time to think about the future of BORN2BE, Cherelle said: “In 5 years I’d like to see BORN2BE be established in the scene of modern black music. I would like to see us recognised within the industry amongst our peers. I would like to see us have an artist that goes on to sign to a major label, or simply go on to big things. I think the current guys can do that. I think in 5 years we will be talking with some major people.”

Stay alert to BORN2BE over the next few years, as it continues its journey. 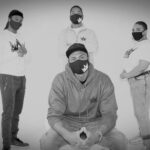